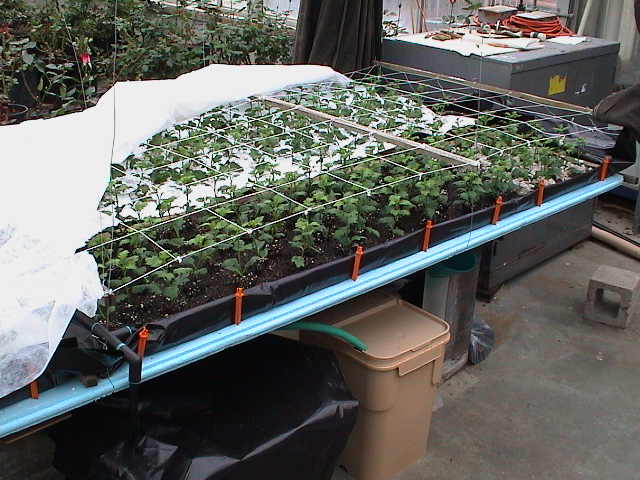 Gas composition and oxygen supply in the root environment of substrates in closed hydroponic systems.

The objective of this study was to get more information about the root zone, mainly the gas composition in substrates, which are used in closed hydroponic systems.

For analyses of carbon dioxide (CO2), ethylene (C2H4) and oxygen (O2) different methods were proofed and used. For analyses of carbon dioxide and ethylene, a gas sampling system was used to get gas samples from the root zone. CO2  gas samples of 20 ml were analyzed with an IR sensor by air diffusion into a measuring cuvette. C2H4 gas samples of 3 ml were analyzed using gas chromatography (GC). Gas sample cells were inserted into the substrates at 2 or 3 heights. Dissolved oxygen was determined with a membrane covered galvanic sensor, in the air, in the in the nutrient solution, and in the drain solution. To analyze the root zone, a hydroponic system with chrysanthemum cv. 'Snow' on 3 substrates was performed. The following substrates were used: Sawagrow (polyester fiber), polyester fleece (thin layer of fleece), and UC-mix (peat substrate).

Gas sampling at 2 or 3 heights from root zone did function well, results ranged  from 350 ppm to 7700 ppm CO2, and  from 0.0088 ppm to 0.1147 ppm of C2H4. The organic substrates UC-mix contains more CO2, from top to the bottom the CO2 level increased. The CO2 level is influenced by microbial and root respiration. The determined CO2 concentration is no limiting growth factor.

Results of C2H4 shown an influence by the substrates and a gradient from the top to the bottom. But highest level was determined in the middle and at the bottom of the substrates. The time course shows during the day pattern according the photoperiod. The trend of C2H4 level was almost constant during the experiment.

78 % - 99 %.  O2 level of solution and drain can be an indicator for oxygen deficiency, but it is no direct measurement in root zone or roots. The O2 content in air between 10.5 % to 20.4 %. During the experiment the O2 concentration decreased; for CO2 the opposite trend was found.